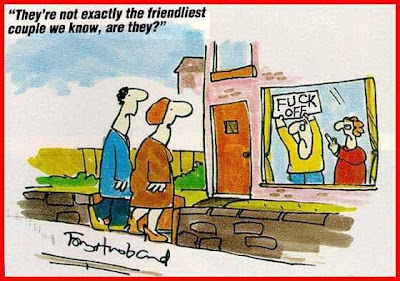 I think I might have mentioned that I live in a very pleasant area. Gardens are maintained, cars are mostly newish and the residents are decent folk (for the most part at least). You will not see ladies of ill repute lurking on street corners, or hoodies gathered in gangs looking menacing down dark alleys.

Imagine my surprise then, when I went to pick up my youngest from school, and saw one of the mothers in what I can only describe as a practically totally transparent skirt. It was supposed to be a type of long, straight, denim skirt, but the back, instead of having a panel of denim had a panel of blue voile. I'm not sure if she thought it was sufficiently thick to hide her modesty, but it wasn't. A pair of blue knickers, her arse and legs were freely visible for all to gawp at.

I thought about rushing after her to warn her that she may be exposing more than she intended, but she had sauntered off pretty fast, and guess what... I just couldn't be arsed. I must say, she didn't seem to attract that much attention from other mummies waiting to pick up their little darlings. Perhaps they were so incredibly focused on the task in hand that they were blind to the entertainment to be had by paying attention to their surroundings!

Talking of arsed, or not, I couldn't be arsed either to be too polite yesterday morning at 7.30am to the neighbour who accosted me as I was trying to get my eldest to school. He was putting out his paper rubbish, came out of the bin shelter and waved at me to stop as I was just about to pass him.

Nonplussed at being delayed, when time is at a premium in the mornings, and two minutes can mean sitting in a moderately long traffic jam or one that goes via China, I wound down the window (electronically, natch). He looked very disheveled and unsavoury. Unshaven, skinny, mean and bad-tempered. A real catch...

I eyed him unpleasantly through my snazzy Gucci glasses and he started wittering on at how much noise sundry children had made the previous evening playing football at the top of our cul de sac, just outside his house.

We've had problems with him and his wife before. They are childless and don't seem to like children. Apparently they bought their house, in a road where half the houses have kids, because they were told it was peaceful. For them, peaceful means no noise. At all. Not hearing children laughing, playing, having fun. No. Peace = silence, which is golden and to which they are entitled.

If I'd been them, I think I would have bought something in the middle of nowhere in a tiny hamlet rather than in the middle of a large village. They are horrified at the noise the group of relatively well-behaved (mostly boys) kids makes. I am singularly unsympathetic. The kids are making no more noise now than before, and no one complained previously.

This pair seem to expect the whole road to conform to their perception of calmness. While good neighbours make an effort to coexist in harmony, there is a limit to what you can expect of a bunch of kids.

So there I was, in the car, running late, and being wittered at by this somewhat nervous guy. Stuttering a bit, he was. Could it have been due to my air of uncooperation and impatience...? When he'd finished blathering, he waited for me to apologise, I suppose, or look crestfallen, or commiserate, or vow that Things Would Change. Unfortunately for him though, all I could muster by way of a response was to tell him that I was in a hurry and had to go, right now. That was as polite as he was going to get. He backed off, somewhat surprised, and suggested we could discuss it another time.

My eldest then told me it had been my youngest and the kid opposite, so I later reminded my son not to play footie too late - cos I'm not a total bitch - in front of the twat's house, but to do something else instead. So this evening they went to their cabin in the garrigue opposite to make certain home improvements. As I was cooking dinner, I turned to see my youngest making his way out of the house carrying what used to be a wooden pole gate from the garden together with screwdriver and hammer. He's nothing if not resourceful, that one.

The dismal couple are so aghast at the mistake they've made that they reckon they'll sell up and move within the next couple of years. Yeah!
Published at 8:58 pm