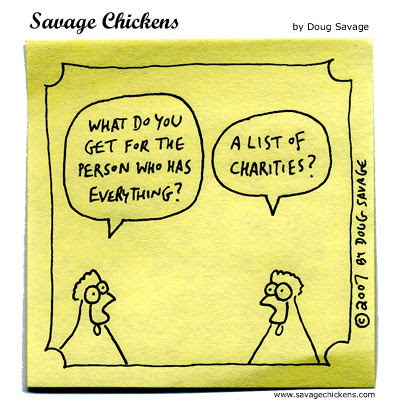 Have you ever wondered if the money you give to charity actually ever gets to its destination or if it's swallowed up in administrative costs or diverted to line the pockets of corrupt government officials? The fact that African leaders such as Mugabe lead such extravagant lives I expect is much to do with sequestrating the millions that are pumped into the country through aid and charitable gifts.

The ordinary African on the street trying to make a living, expanding a little business, managing his/her own life is hampered by cash flow problems and investment issues. Not everyone wants to accept aid. Most people would much prefer to be provided with the means by which they can progress, preferably without having to feel grateful.

Gratitude is very tricky. People who want to be in charge of their own lives are proud. They don't want to have to feel grateful for a handout. Gratitude often goes hand in hand with resentment from being in an inferior position. If you were in a sticky situation, would you be happy to take help, or would you rather accept a temporary loan that you would insist on paying back ASAP?

There's no reason to think that Africans are any different. Or Indians, or indeed anyone else. In Bangladesh, the Grameen Bank has offered small loans to millions of people, 97% of whom are women. It has helped them climb their way out of poverty through their own hard work.

In The Times yesterday, there is an article focusing on a project in Africa whereby potential investors can examine the needs of African entrepreneurs through the website MyC4.com and, from the comfort of their computer chair, make a bid on the amount of money needed according to the rate of interest they would like to propose. The investor offering the lowest rate wins the investment. S/He can then supply all or some of the loan.

So far, over $5m has been invested in the scheme. The default rate is very low - only 2-3%, and those entrepreneurs who do default are then unable to get another loan because no one wants to invest in a known failure. Of course, the great thing about the internet is that it can attract a worldwide audience and MyC4 is no exception - 78 countries are registered, with more than 10,000 investors.

I think it's a terrific idea because you know for sure that if you loan 100€, for example, the whole 100€ will be available to the person at the other end. Small businesses are thus able to thrive and even take on employees, people are made independent, and the local economy benefits.

Check out the site MyC4.com - you can't fail but be impressed.
Published at 7:25 am