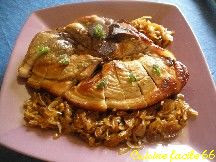 French meat cuts are sometimes a bit on the confusing side. I wonder if yer average French woman or man would know that a 'rouelle de jambon' was actually a joint of pork, if they'd even heard of it. Wouldn't you expect it to be a gammon steak?

I bought some rouelle de jambon the other day. It was amazing value, so I went in search of a recipe on the internet. The tastiest-sounding one I found was roasted rouelle in beer with honey, on a bed of confit oignons. That sounded yummy, but I had no idea whether what would turn out would be ham or pork.

In the end, of course, it was pork, and the recipe did it proud. I had friends over and they all thought it was delicious. The recipe suggested serving it with red cabbage salad, but I chose baked spuds instead as we'd had salad to start, and I totally adore baked spuds in the winter. The sauce went beautifully with them.

Actually, trying to find a joint of ham is very difficult. I saw some classic ham joints this Christmas, but otherwise, I have to rely on 'palette' which is a cut near the shoulder blade (given the shape of the bone it's attached to). Most ham seems to go to being cured into jambon sec. As I like to cook a joint of ham with parsley sauce, I had to search out what I could use.

It took a lot of trial and error. Even talking to the butchers in the supermarket didn't enlighten me. I know I shouldn't maybe be too surprised about that, they are supermarket butchers, not real artisan butcher butchers, but you'd think they'd know whether the meat was salted or not. It's not rocket science, is it?

They didn't seem to grasp what I was trying to establish. It may have been my French, of course. I was ham hunting some years ago when my language skills might not have been so proficient, but I don't think they were that bad. Asking whether a joint is porc ou jambon is a fairly simple question. I just got looked at like I was mad. (Or maybe that was because of some other reason...)

Mind you, French supermarkets are a lot more sophisticated now than they were. They have changed incredibly in the last 15yrs with very much more choice, and more international products. You can buy decent Cheddar in Carrefour, proper tea (not that Lipton Yellow crap), and flavoured crisps! The fact that I saw ham joints this Christmas is continuing proof of progress - I've never seen them before, and I do look.

Anyway, as we're in an age where frugality is trendy again, I would strongly recommend the rouelle de jambon de porc. It's very cheap, and you can make a super dish in about three hours including preparation. That's no more than a hearty casserole.