Yesterday, being Saturday and the day I absolutely have to do some cleaning, was sunny and warm-ish. I got the boys to change the back inner tube of my youngest's bike - by themselves. They weren't keen and engaged in a fair stint of moaning and groaning, but I advised them that they were going nowhere until it was done so the best thing would be to just get on with it.

In the end, it was done, with one or two moments of minimal help from me. I told them that I could have done it for them, and let them sit on their backsides all afternoon waiting for it to be done, but I had no intention of turning them into enabled spoilt incapable brats. As they have already seen how it is done, I got them to do it, and they had to persevere until they'd worked it out. They were pretty furious but I was unrepentent.

While they were thus engaged, I was cleaning the window doors and in no mean temper myself. So today, the last day of the holidays, I was determined that we go somewhere together and have a good time, and go out with a bang. 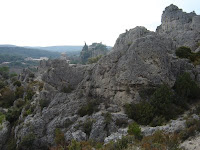 They flipped through my book of walks and finally agreed on the Cirque de Mourèze. It's situated about 50km east of Montpellier just after Clermont l'Hérault. I've been there several times and the best time to go is definitely out of season. It gets very hot there and there's little shade. Walking round it is akin to burning in hell (except that hell doesn't exist any more as proved by that chemistry student).

Today it was cool (12°C) and windy - very windy. The boys and friend E went equipped, armed to the eyeballs with bamboo spears (formerly known as tomato tutors), swords, shields and Crusader tunic (my youngest). I've actually given up growing tomatoes - the last two years my crop has been attacked by 'punaises' which are those little buggers that suck tomatoes dry and leave you with a white mousse for flesh and no moisture. As the seeds are expensive, I might just as well leave it to the professionals and buy them from the supermarket. It works out as less expensive and less hassle.

In undercover mode, the boys yomped through the undergrowth towards the Cirque. I made up the rear guard, my head full of a poisonous text message I was going to send my ex as soon as we hit open ground. As a result I wasn't quite appreciating the manoeuvres as I might have done had I not been composing concise and undebateable code. 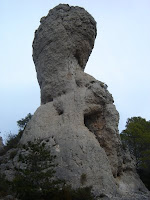 We made it to the dolomites which are impressive gigantic columns of limestone in various forms mostly open to phallic interpretation, to the boys' delight. You walk, clamber and skid over the eroded rock which is all crumbly and requires some concentration to negotiate. I had to convince my youngest that even with studs on his soles, he should still not try to jump onto a slope of gravel. They would do nothing to prevent him sliding gracefully all the way to the bottom. Naturally, it was only through experience that he actually learnt the truth of his mother's words. Well, you know that mothers are notorious for spoiling one's fun by making up all sorts of dangers and then warning you endlessly not to *jump off a cliff, *put your hand in the fire, *dive into 3inches of water from a great height, *career down a steep slope on a bike with no brakes, and so on.

I saw my eldest fall over backwards into some bushes, just managing to grab him and haul him up without too much damage. He had decided it would be fun to get off the path and take an adventurous route back. It was not a good idea, and after seeing him catch his foot and just take a backward fall, I called for order, reminded them that ambulances didn't often pass that way, and we would go back to the path to avoid further incidents!

They had a great time fighting each other - battles on rocky outcrops being blown about by the wind, hide and seek in amongst the bushes and cavelets, and thrashing the hell out of dead, fallen trees. I nearly got blown off the top of one rocky outcrop and immediately nearly had heart failure seeing my eldest climb on up to the most exposed spot and embrace the wind. Luckily he was not whisked up and away to be planted on top of the highest most inaccessible dolomite, requiring helicopters and emergency teams to rescue him, but jumped down (onto gravel) and skipped off delighted with his daring do.

After a couple of hours of this, it was time to make it back to base camp (the car) for water and a drive home. They were all pretty quiet on the way back, full as they were of fresh air, exercise and a good dose of blustery blowing about.