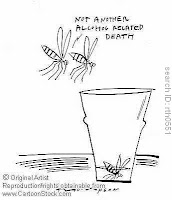 The Million Women Study has just knocked another nail in the coffin that was Fun. This huge study involving British women over the age of 50 is proving to be an invaluable source of information on women's health.
Information, however, is a dangerous thing. Do you really want to know, for example, that drinking low to moderate quantities of alcohol will increase the likelihood of you getting certain cancers by 15 per 1000 women? Having a drink is such a pleasure, or it used to be. Will you ever be able to look at a glass of wine again without seeing the worst consequences of breast cancer in your mind's eye?
This effect comes if you drink no more than 1 drink per day. The more you consume, the more likely it is that you'll be struck down with breast cancer, cancers of the oral cavity and pharynx, cancer of the rectum, or cancers of the esophagus, larynx and liver.
How friggin' depressing. Of course, you've got to offset this data with that which exhorts us to drink red wine full of polyphenals to protect us against heart disease. Unfortunately, the balance doesn't work out sufficiently strongly in favour of the heart when compared with the higher incidence of cancer.
Great! We might as well all throw ourselves off the nearest bridge in an alcoholic haze - our last. I suppose we know that everything agreable is either killing us, making us fat, or making us targets for nasty diseases. Now we can add alcohol to the list of serious offenders.
Alternatively, as the NHS is panicking at the increasing numbers of old people, why don't they offer a special treatment to kill us off quicker? They could subsidise alcohol on the understanding that treatment other than painkillers would not be available if we developed cancer. The nation would perk up no end, and the substantial amount of money saved could be spent on financing care homes for the sozzled and freeing their family up to go back to work and help repay the abyss of debt that the government has landed us with for the next X number of decades.
I wonder how long it will be before the French wine industry hear about this report, and how they'll deal with the fallout. They've been basking in the heart protection aspect for the last few years, but that won't be enough to compensate for the increase in cancers that comes from drinking even only tiny amounts of alcohol. Prepare for an uproar!
Published at 4:35 pm