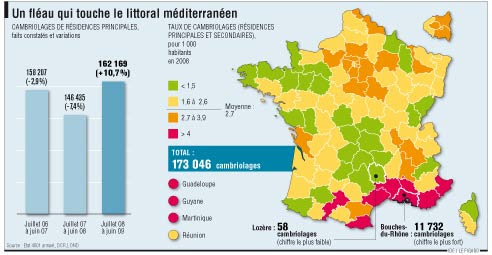 Last year, one of my glass terrace doors received what looked like a good kick which broke one pane of double-glazing but not the other. Together with the stamped on fencing, that was the extent of the damage, luckily.

Apparently it could have been very different. I live in a cul de sac of houses like mine and a couple of months ago there was a 'crime wave' in our little street. Drying sheets were stolen from gardens and houses were broken into in broad daylight during working hours.

The residents had a meeting one day to assess the situation with a local policeman. He told us that the best thing to do was to be aware of our environment, keep a look-out for suspicious doods hanging about and generally be good neighbours. There was, he said, a problem with burglaries throughout the region, the perpetrators being groups of thieves from Eastern Europe.

I was impressed that these guys were not just hooligans from the local sink estate (La Paillade), but had trekked over all the way from a long way east and found our quiet little village. There's dedication!

I would not, however, like to be burgled again. This happened to me in 1992 twice in three months (time to have insurance money and replace the nicked stuff) and that's quite enough thank you. Funnily enough, at that time, we had a bunch of gypsies squatting on waste land 50m from our apartment block with ample leisure time to observe our comings and goings...

Anyway, it seems that the current wave of villainy has pushed the crime figures right up. Le Figaro reports a 10% increase in house break-ins in the last 12 months, with the eastern bloc gangs going essentially for money and jewellery. There's a burglary every 3 minutes nationwide!

On the subject of dodgy goings-on, I was stopped at a roundabout yesterday by a group of three young people wearing visibility jackets. At first, I thought they were members of the CGT distributing strike tracts but was quite surprised when one guy said to me he wasn't going to attack me. I hadn't thought of that, and as soon as he said it immediately wondered how I could escape!

It turned out that this group were supposed to be raising (begging for) money for young people (them...) in difficulty. I asked to see their official paper allowing them to do this and was given a scanned sheet dating back to 2006 authorising 'vente ambulante'. Naturally I said that I couldn't see anything for sale, and was told they had some little teddies but that that wasn't the point. No, I thought, you are begging.

The car in front of me had by this time gone, so I just wished them luck, said I wasn't interested and drove off. I wondered whether I should call the police as, having said they wouldn't attack, they suddenly became a bit scary. Where I come from, you don't need to say you won't be aggressive and if you do, you become like a dentist ("this won't hurt...").

In the end I left them to it. They looked like they could have come from La Paillade and while I applaud their desire to get out of a difficult situation, it's not by begging, however imaginatively, that they'll make any long term difference.
Published at 10:46 pm