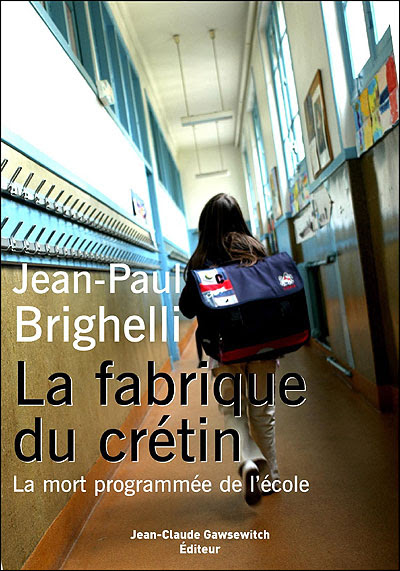 All noses are back to the grindstone now the boys are back at school, and for the moment, no one has gone on strike.

It may not last, however, as the teachers' unions are revving up to make a Big Fuss about declining numbers of teachers and rising numbers of pupils per class. My youngest, in CE2, has two teachers this year - one doing Mondays and Tuesdays, the other doing Thursdays and Fridays. Hopefully neither will go on strike...

Also revving up to make big fusses, apparently, are parents. It's the pushy parent syndrome, French style. An article in Le Figaro tells some fab stories of parents who will not accept their darlings can do any wrong, and even if they do, it's up to the school to clear up as it's our taxes which finance their jobs... The little darlings are referred collectively as 'Moncherimoncoeur'. One such was forever breaking up the school toilets and the mother was summoned, whereupon she said that if MCMC breaks the toilets 1000 times, it's up to the administration and teachers to fix them 1001 times.

Another wrote in to say that 'We have worked. MCMC knows his lesson off by heart, it's out of the question that he copy it out again. We think that this harassment should stop immediately.'

Other parents believe that teachers should be more involved in bringing up the kids, to make up for, I suppose, the lack of parenting they get at home. So, on the one hand, parents have over-exaggerated demands on teachers whilst being totally laxist, parentally, themselves, and it's the lawyers who are the worst behaved.

It's all Lionel Jospin's fault - how nice to have a scapegoat! In 1987 he brought in a new set of regulations to schools which put kids at the centre of education and accorded parents the role of 'Parent d'élève' which made them an integral part of the whole education community.

This, in hindsight, was a disaster, and Sarko has promised to abolish it, but it's probably too late. Pushy parents have got the bit between their teeth and it's unlikely they'll let go now. In some respects, this can be good, because there are some terrible teachers. If they had carte blanche to do as they liked, the situation would be no better and probably much worse (for the kids they taught).

Many teachers are not motivated, are not interested in developing lessons with new technologies or changing any of their habits. If it aint broke... But it does mean that kids can go through 4yrs of collège in the 21st century and barely flick a finger over a keyboard. They don't even learn to type!

It is heartening, though, that there are other teachers who believe in education and motivation to learn. They strive for excellence and spread their expertise as widely as possible on the internet. One such is Dr Raynal at Toulouse University who has set up a super website specialising in SVT lessons (science). Especially good are the lessons for 3e. He also has a series of links to websites for other subjects. Thankfully, it only takes a few on the internet, for a maximum to benefit.

We live in a fabulously democratic age.
Published at 6:33 pm