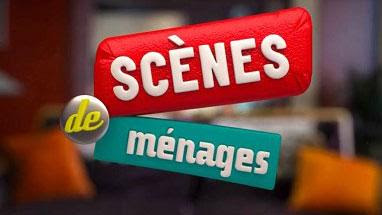 M6 has created a little bijoux of a 'shortcom', 'Scènes de Ménage', a weektime daily series that goes out at 8.05pm.

I tried to resist watching it, but it's so piquant in its humour, and so Frenchly true (and maybe even universally accurate) that it's plus fort que moi.

Three couples in their thirties (mixed - him black, her white), fifties, and seventies, are portrayed in short 'scènes de ménages' which are based on arguments, but not always. For example, in one scene, the elderly woman asks her husband if he appreciates her for her beauty or her intelligence and he replies 'For your sense of humour'. That is typical of the sometimes vicious humour that they aggress each other with. Of course, being French, they indulge themselves in a lot of shrieking and shouting, but ultimately they are solidly married and stay that way.

It's very funny and so true, and there's nothing like it anywhere else on the tele. It makes a change from a standard soap like Plus Belle la Vie too. Talking of which, Canal+ has made a series called 'Pigalle, la Nuit'. I suspect they are taking the piss but I couldn't detect any parody in the preview.

According to SeriesLive.com, M6 has joined up in a partnership with Vie de Merde.fr, the website where people write in to recount shitty happenings in their lives. Apparently, people will be able to vote on the best VdM story which will be made into a SdM scene. The successful contributor gets to see his or her story on tele and sees it being filmed too.

It's all very silly, but a good laugh. Of course, some of the language is a bit fruity, but nothing that your average French adult wouldn't say in the course of a haranguing match. 'Merde' comes into it quite a lot...

Shame it's on at prime eating/chatting time though. I get the impression sometimes that there's a conspiracy to stop me living the sort of civilised life where people have intelligent discussions over a delicious dinner. Yeah, I am taking the piss. I have a male ado at home. Any hope of a semblance of civilised discussion over dinner is wishful thinking and just an illusion...
Published at 8:44 pm