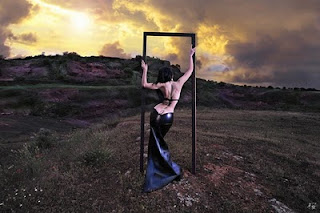 I was idling through our local rag online, Midi Libre, when I came across a few unexpected sections. The first was a whole series of pin-ups done by a French photographer, Nath-Sakura. I thought this photo quite striking - the model has a nice arse, is standing on a volcano at sunset in a dramatic composition. She's most well-known for her fetish-SM photos but now works mainly for mainstream newspapers. She lives near Montpellier hence the number of photos taken from around Hérault.

What with Rémi Gaillard and Nath-Sakuru, you can't say I don't offer you opportunities to see alternative views of the area.

Juxtaposed with borderline fetish photography is a blog on bull racing or la Course Camarguaise. Thursday's post was on an amazing little girl of 7 called Anna Vinuesa. She was giving a demonstration at the prestigious Gala des Crinières d'Or de Cheval Passion in Avignon on herding (?) horses. She lives on a manade where they breed horses for the Camarguais races and has grown up alongside these beautiful animals.

The following post shows a series of photos of bulls in the snow at St Hilaire de Beauvoir. You normally see them in high summer in searing heat, standing about in a scorched field. Here they are standing, unperturbed, in the snow, presumably with lovely thick winter coats. I love the way the snow renders the countryside unrecognisable so it could be absolutely anywhere practically in Europe, except there is the Camarguais taureau.

Midi Libre has another blog that stands out from the usual diet of music, technology and fashion. The Torosblog is dedicated to professional bull fighting, like the sort that goes on in the Nimes Arènes. Recent news includes the programme for the Arles Arènes 2010, including 8 corridas de toros, 1 corrida de rejon, 2 novilladas piquées and 3 sans picadors. For the keen fan, I feel...

A la une, as they say for headline news, is an account of a man who was tied to the high speed train lines near Saint-Césaire. The man, in his fifties had his toes and fingers partly sectioned and had to have a toe amputated. He claims to have been attacked and attached to the rails, but apparently he's known to the police for having orchestrated an elaborate suicide attempt and a worrying disappearance. Obviously a nut case, the police are following several leads.

That was a pretty exceptional news item, as you can imagine. The headline news for Montpellier was more typical - 70 kids were cared for during Thursday's strike by teachers. The Mairie is obliged to provide a structure for parents who work to leave their kids during strike action - the SMA Structure Minimum d'Acceuil.  They don't do this willingly, but are legally bound to provide childcare. Quite right too. I have to take annual leave to take care of my son and object to taking it for nothing. So, out of the 6000 kids, apparently, who attend school in Montpellier, only 70 took advantage of the SMA. It's not surprising because schools advise parents to make alternative arrangements if possible.

What are the headlines in your local rag this week? Apart from international ones which don't count.