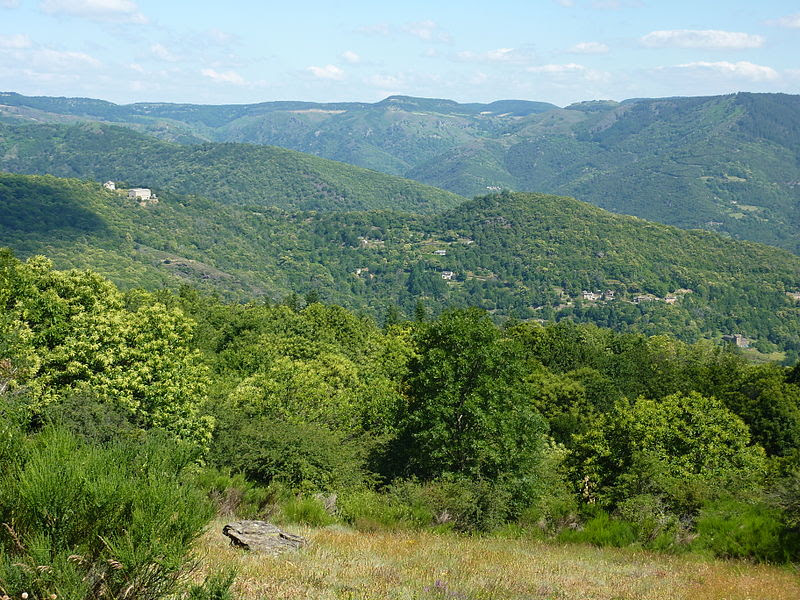 The back of a motorbike is such an interesting place to be for one who gets high on an absence of responsibility. All I have to do is hang on and make myself felt as little as possible and I am free to enjoy views and smells and the sweetness of the Spring air. While my dearly beloved is negotiating corners, bumps, holes, traffic and other demands on his attention, I can dream and observe without a care in the world.

This Easter weekend I was thoroughly spoilt with views pleins les yeux. We went up to the Cevennes and over into Lozere. From Montpellier, we drove up to St Hippolyte du Fort and on to St Jean du Gard which is linked to Florac by the Corniche des Cevennes. At this time of year, the chataigners are newly in leaf and the contrast of their fresh green compared to the darker pines is stunning.

The hills and vales go on and on, the views interspersed with the odd habitation and village. There were loads of bikers out in the fine weather, many in groups taking in the fantastic riding conditions at their leisure. From Florac, where we found yet more bikers (British and Swiss) enjoying lunch at a hostelry, we decided to continue on our way along the Gorges du Tarn.

At some point we decided to stop for lunch and I brought out some goodies I'd prepared earlier - sandwiches made with Beaufort from the market, fresh peas in the pod picked that morning and so sweet they were like heaven, and some tasty tomatoes, both bought from the pricey greengrocer's in the village. Well, it was Easter! We found a secluded spot off the road, with fabulous views and a picnic table and enjoyed every last crumb.

We met yet more bikers along the narrow, windy roads of the gorge, and my dearly beloved even had a sort of speedy session with the leaders of one group. I was thankful when he stopped to look at the map and they passed us. Later, we saw the whole group at another pit stop and he got some respectful biker nods as we drove on.

From the Gorges du Tarn, we continued on the thème des gorges and wound our way along the Gorges de la Jonte, passing an observation post/museum for vultures! We even saw the vultures, which were nesting in some huge outcrop and kept soaring in and out, providing a fine spectacle.

Keeping to the green roads, we drove back to Florac and crossed over into the Mont Lozere National Park along the D998. By this time it was getting on, so we decided to find a hotel. I was a tad worried because there were lots of people about and, as a holiday weekend, I feared space might be a tad scarce. After 3 goes, however, we found the Auberge du Beausejour near Génolhac at Concoules, a basic hostelry situated on the side of the road, but with a promising barbecue and fantastic views. It proved to be basic and cheap, €81 demi pension for two, but the owners were a cheery bunch and told us they had previously owned a huge hotel in La Grande Motte and had moved up to Lozere for a quieter way of life. I enjoyed my grilled lamb cutlets (for Easter) cooked to perfection on the barbecue and my dearly beloved enjoyed the cheese plateau which, for some unwise reason, they left at our table. I had to remove it in the end before he demolished the lot!

Yesterday, we continued north to Villefort which is a lovely little town and right next to a stunning reservoir. You get the best view of the lake if you climb up on the D906 to La Garde-Guerin. Half way up there's a viewpoint which has to be my favourite point in the whole trip. What with the mountains, the lake, the viaduct, other bridges and the escarpment of the Gorges du Chassezac, it is one of the most stunning visual scenes in the region. I was completely bowled over by it.

Up onto the plateau, and we had a brief stop at La Garde-Guerin which is on the Route du Régordane, a major medieval trade route that linked the Massif Central to the Mediterranean. You can still walk it or bike it as it's been rehabilitated and maintained as a GR (Grande Randonnée).

We turned back and meandered our way along more green roads over Mont Lozere to Mont Aigoual where it was, naturally, raining. It was fascinating to see it without snow as I'm usually there to go skiing. The ski lifts looked pretty forlorn in the brown grass and wet. It continued raining as far as Le Vigan and threw it down at Laroque where we enjoyed a late lunch of warming poulet frites. We were pretty pleased to be under cover and merely watching the torrential streams from inside.

We made it home safely, exhausted by the ride, the sensory overload and the exercise required to ride. A fantastic weekend, and still so much to explore
Published at 7:56 pm