We've just come back from 5 days of motorbiking all over the place. In and out of Aveyron and Tarn we popped, up up into Cantal to the heights of Puy Mary (12.5°C and a howling gale) and back down to the douceurs of the Lot.

The high-light? How can one choose between the different landscapes? Rugged tree-covered crags, undulating hills and vales, narrow valleys, panoramic views over plateaux, river banks, "les plus villages de France" (Aveyron comes top of the list with 10!), "les Grands Sites" (we saw 3 - Conques, Cordes sur Ciel, Rocamadour), hostile mountains still with a touch of snow, sweet little hamlets, and so on.

Click on the photos to get the full impact because the views were absolutely stunning.

The first here is my favourite - Ambialet, in the Tarn which is located on a peninsular. Our hotel was over on the right at the end of the bridge - the Hotel du Pont - which has been in the same family for seven generations. The view from our bedroom window is on the second photo. 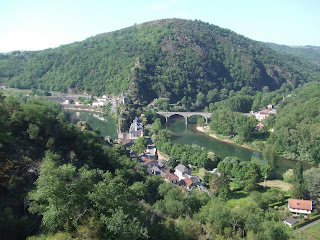 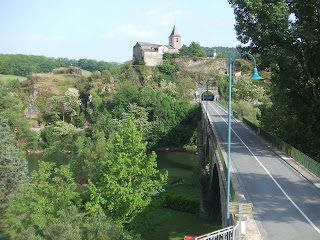 We had lunch overlooking this castle at Laguépie on the Viaur river, again in the Tarn region. We drove along the fortified road opposite which took us right along the river. 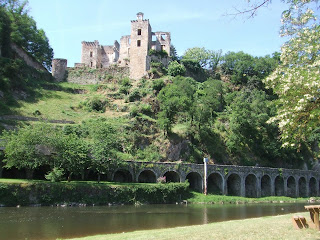 Our second night was spent just outside Conques (below), in a delightful chambre d'hote run by Maurya Metal, an American artist, and her Dutch husband who is an ecologist. They had friends in town so we didn't get to try the table d'hote, but we ate at a very good value restaurant (Auberge de St Jacques) in Conques instead, and I got to try a real aligot. 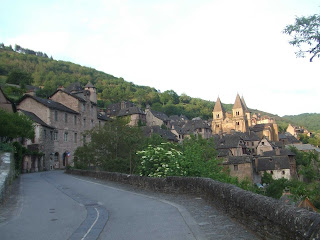 This is the view from our room in the tiny hamlet of Montagnac just outside Conques. It was very quiet and peaceful, the rooms set in an old stone house of the hamlet with wooden board floors and decorated with authentic taste. Breakfast was fantastic with different breads and homemade jams. 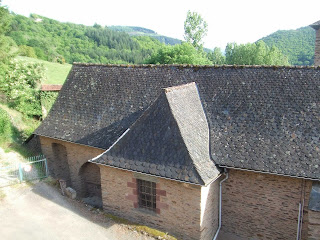 I was surprised to see lots of scarecrows along the roads and at the entrance to properties in Aveyron, and apparently there's a festival every year. Locals dress up scarecrows in all sorts of costumes, from ski suits to working overalls. Participation was definitely active and enthusiastic!

The roadsides were a picture with spring flowers and smelled divine with what seemed to be trees of white wisteria, gorse, damp ferns, earth, pine and lilac.

On Puy Mary we had lunch in the auberge there, thankful to be out of the wind and cold. If we'd known what was on offer, we would have made arrangements because they had a fantastic planche of Salers steak, truffade and other delights. It looked and smelled delicious, but we had planned on a light lunch that day as we'd been stuffing our faces previously. We intend to go back! We also want to ride the Route des Crètes as this time we were sent on the Vallée de la Jordanne route by my TWDB's motorbike book which gives amazing views over the valley and up to the peaks opposite. One to do in June, probably, when the weather is a little more clement.

On Saturday we made our way to Rocamadour to a bike meet organised by Survive France Network member Jennifer Iddon and her husband James who own the B&B La Noyeraie. We managed to get a room with a lovely sloping floor which gave the wardrobe an interesting angle, while others camped (bravely) in the 9 hectares of land. It was very very windy so we were pretty pleased not to be riding that day. We did get over to see Rocamadour though (below) which was busy and must be hell in the summer. 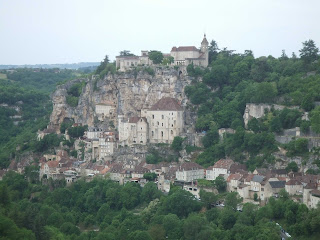 I felt a bit of a fraud as I'm a mere biker passenger and not a dyed in the wool biker nut, and I was the only one, but people very kindly talked to me about things other than engines and biking gossip so I had a lovely time. My biker nut TWDB enjoyed himself too, talking shop with the 20 or so others and admiring the huge Dunlop MotoGP trailer truck, inside and out, which is run by a friend of the Iddons. A treasure trove for tyre and tool enthusiasts it was. I found a biker from Swansea who now lives in France so we had a cosy chat about Mumbles, the beaches, the boat club and what a small world it is.

James apparently bakes the breakfast bread on normal non-bike meet days and uses local ingredients for the table d'hote. They also have a Café 46 (a Rossi reference...) so if you're in the area, do pop in as you'll get a great welcome, especially if you're a biker.

We drove home across country yesterday and made excellent time as far as Millau. We had the bacon butties that Jen had prepared for us, and the end of a bottle of Cahors on the plateau de Larzac off the road in a quiet spot not far from the military training zone. We then avoided the motorway to come back via Le Vigan along the green roads wiggling their way down off the plateau.

In total, we did over 1000km, stayed in some lovely places and had an eyeful of spectacular sites. A terrific little holiday.
Published at 10:37 pm