Walking up the Pic St Loup 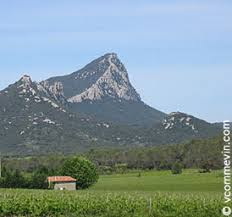 There is a walk about 20km north of Montpellier that every resident worth his/her salt has to do at some time - the Pic St Loup. You might recognise the name from your wine drinking - it's a wine appellation too which takes its name from this impressive limestone outcrop.

I have been on this walk several times, once even with my eldest as a baby in a sling! It's actually not quite as undemanding as it sounds as there are several rocky outcrops you have to scramble over, and scree paths you work your calf muscles on trying not to slide backwards (or rocketing forwards coming down).

You get to it by passing through the elegantly restored village of Cazevielle which now looks so clean and spruce you start to tot up the likely cost of restoration on your taxes... On the other side is a roomy car park which is often full of cars because of the popularity of this walk. I've seen grannies on it, teenagers in unsuitable shoes, folks out walking dogs from rat-sized mini things to handsome Labradors, kiddies and dads bearing babies on their backs.

The Pic St Loup is an icon for the region's residents, visible as it is from the coast to the Gard next door. It soars up to 658 m although the walk itself starts at around 350m. From half-way up on a clear day you can see as far as the sea
At this point, the path is nice and easy and my dearly beloved enjoyed testing out his new high-tech walking sticks.
From being out in the open, the path also meandered through some shadier spots of stunted split trunk oaks necessarily hardy from being roasted in summer, drowned in autumnal storms, and blown about by high winds from the freezing north in winter. 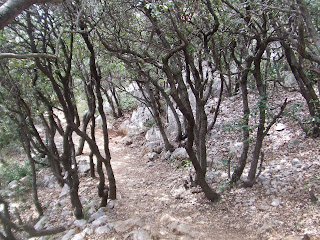 We reached the top after an hour or so, unused as we are to strenuous walks like this. Our exercise tends to come sporadically but intensely, exactly how one is not supposed to exercise, but as rule, the mind is weak and the body takes advantage...

Still, it was worth it for the stunning views even though it was quite crowded up there, standing room only almost.


There is no fence to protect you from elfansafety so you're on yer own with regards to falling over the rocky edge, with nothing to break your fall for a couple of hundred metres. If you fell backwards you'd have a lovely view of the gliders soaring high above and hear the regular droning of the planes that bring them up. Those would probably be your last impressions however as I'm not sure anyone has survived the fall...

There is no café up there, no stand selling drinks and popcorn, no tacky souvenir shack. You just get the glorious view, an iron cross, an observation post, a bunch of fellow walkers munching on, for example a beef tomato, energy snacks or perhaps even a picnic; the odd dog and the hermitage.
It was restored by volunteers and is a cool shady spot on a hot day, where you can admire the little shrine that has sprung up. 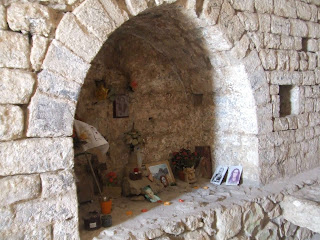 We left the Pic St Loup and ambled down getting stuck in a traffic jam at one point behind a family of 3 generations and a group of 3 chatty girls and their dog which kept running off to explore. When they stopped to rest/whistle to the dog, we carried on and were later ourselves overtaken by more students. It took us about an hour to get down so a good two hours in total plus mucking about time at the summit.

If you're visiting Montpellier and fancy a lovely walk, and it's not high summer, do go up the Pic St Loup, and remember that when you get back down all tired and sweaty you'll enjoy that glass of chilled rosé with even more intense appreciation.
Published at 4:24 pm