My DB calls Montpellier 'le trou du cul du monde' (bum hole of the world) simply because it is not Nice and the airport is not a hub for international travel. Personally, I can think of waaaay better candidates for this title because, despite its lack of international transport connections, it's a singularly beautiful part of France. It also has a marked lack of suspect money floating around from dodgy billionaires of all nationalities (but mostly Russian) pushing up housing prices and bumping off inconvenient people...

Yesterday the weather promised clouds and a spark of sunshine. We had agreed to go cycling with some friends down to Palavas les Flots. Palavas is a modest seaside town of no architectural distinction except ugliness, but you can cycle to it from Lattes just south of Montpellier along the banks of the River Lez and then along designated cycle paths. The route takes you through the wetlands that stretch from Lattes and Perols to the sea, an area declared part of the Natura 2000 ecological network of protected areas in the EU. It is home to 72 species of bird including flamingoes, and a number of lagoons covering 75% of the 847 hectares that make up Palavas.

This is the path at the start, at Lattes, looking south. It's recently been renovated to bolster the banks of the river. Our friends live just off to the left. 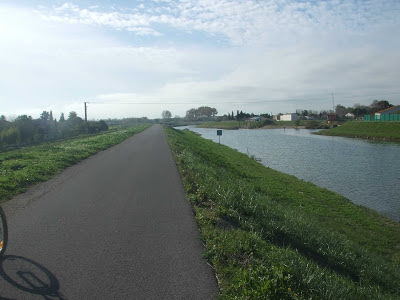 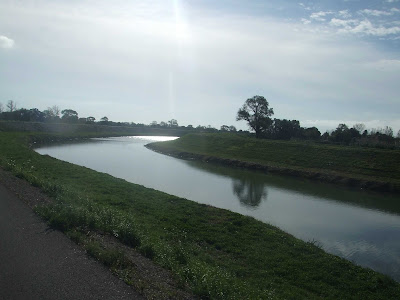 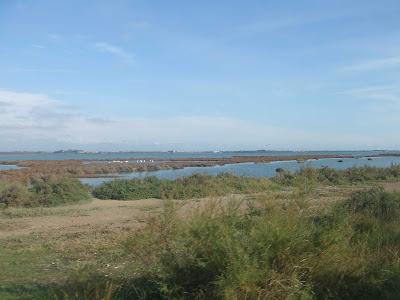 The white dots are flamingoes. Recent heavy rain ensured that the étangs were brimming with water.

Winter storage for the little boats.

I was on the bridge which crosses the Rhone to Sète canal to take this photo. The white apartment blocks of Carnon are in the distance. You can see the étangs (lagoons) to right and left of the canal; the sea is off to the right on the other side of another strip of land (covered in ugly houses). You can walk or cycle from Carnon to Frontignan along the canal.

One of the things I like best about this route is that it is completely flat. I don't have to concentrate on puffing to go up, or worrying about my level of sport. I enjoy cycling as an outdoor activity, not as a way of keeping fit. I like stopping to take photos, admire the view as I go along, and have enough breath to chat if I feel like it. 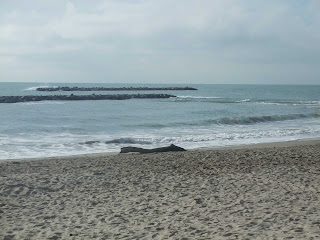 We reached the sea in about 25 minutes, an autumnal sea of waves and gentle light. You can't appreciate the size of the waves in this picture, I think I caught them too early/late, but, for the Mediterranean they were a good size and crashed with a satisfactory show of spray. The coast here is protected by barriers to make swimming safe, and to preserve the sandy beaches. Sea paddling seemed to very popular yesterday, there were lots of people just standing about on the sea chatting by the look of things. 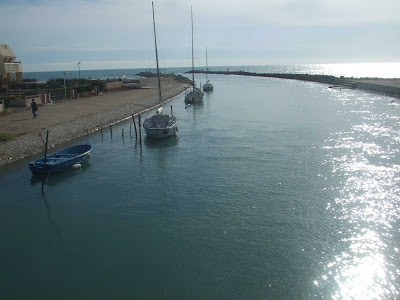 We crossed this bridge to reach the banks of Villeneuve les Maguelone on the right. We continued on past the car park from where you can access the beach, and along the narrow strip of land towards the Maguelone Cathedral set on a volcanic islet 4kms from Palavas. It was built in the 12th/13th century and is a beautiful building combining the strength of pale rock as a fortress, and peace as a place of worship. The acoustics are marvellous too - years ago I sung there with a choir. We performed Jeanne d'Arc au Bucher, an oratorio by Arthur Honegger.


After a brief visit of the cathedral, we headed back to Palavas for lunch, and sat outside Le Riva on the port, in the sun and sipped a much appreciated Puech Haut rosé. 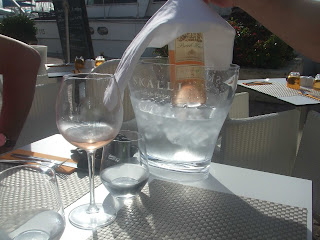 Lunch was good too although two of the party who'd ordered rouget (fish) were somewhat surprised when the plate came with a whole baked fish including head (and dead eyes) on it. My DB said he would remember to look out for 'filet de rouget' next time! My lamb cutlets were lovely and meaty and fatty.

As the clouds decided to make a return, we headed off back to Lattes, passing over the Rhone-Sète canal again where we saw that a couple of paddlers had strayed from the coast for a canal stroll. 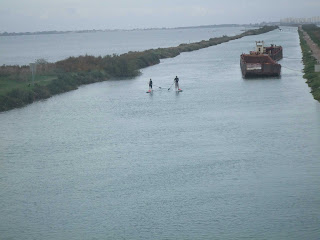 You might not be able to fly directly to Rome or the US from Montpellier, but it does have many other, less frenetic attractions, as I think you'll agree.
Published at 11:47 am