After the storms of the beginning of the week, the end of it promised sunshine and warm weather. My DB suggested we take advantage of it with a bike ride down the coast.

I made some hummus and packed some buckwheat crackers and a couple of apples and we set off for beach. The temperature was perfect for biking in a leather jacket - not too hot nor too cold. The sky was blue and it felt great to be out and enjoying the advantages of living in the south of France.

We cruised from Villeneuve-les-Maguelones to Marseillan where I saw a flock of flamingoes flying east. Would they be spending the winter in Palavas-les-Flots on the shallow lagoons, or would they be taking a right turn and head further south? They made a magnificent sight in their V formation flapping purposefully en route to their destination.

We, on the other hand, didn't have a destination. Our goal was the journey. Journeys give you time to think and reflect. My DB wanted the opportunity to think about projects and plans which he does best whilst riding. I let the scenery impress itself on me, living in the moment, breathing in the smells of the sea and warm pine.

Along some of the coast, it's so built up and fenced off for camp sites, it's quite tricky finding a place to stop at the beach. Eventually we stopped for lunch at Marseillan Plage, having spotted some concrete picnic tables along the canal near a desolate-looking hotel called Le Richemont. Several people were fishing, and some of the tables were occupied by visitors enjoying al fresco eating. It was not a particularly attractive spot, but it was the best we could find that was near the sea.

After lunch we rode on to Valras-Plage where we found a tiny road that gave us access to a beach for a snooze. It looked like people had fenced off plots of land leading down to the sea, but because they were designated as non-constructible, they had installed caravans in amongst the trees. With time, the caravans aged and so it looked like a glorified dump of decay in a beautiful setting. The smell of cooking fish was strong too.

The car park was tiny. Obviously the beach was supposed to be a well-kept secret and available to residents and the odd stray visitor who happened upon it by accident. Storm damage was evident in the detritus that was collected on the sand, from whole tree trunks to strands of reeds and other bits of wood.


After our snooze, we carried on, hugging the coast where possible or following the green roads inland for a while in the Massif de la Clape near Narbonne. From flat and wild scrub, they took us through some rugged hills and sweet-smelling forests. The view of the blue sea between the trees from on high just before the road descended to the coast was spectacular.

At Gruissan, we decided to look for a hotel. Unfortunately, the only one we could find that was open, not full and not a dump was at the casino. It was a busy weekend because there was a jousting competition going on. So we tried Gruissan-Plage where the film 37°2 was filmed amongst the cabins on stilts. It was a little eery all closed up except for the odd weekender tending to his garage. We retraced our steps back to Narbonne-Plage where everywhere was full. This we hadn't expected - the first weekend in October, and not a room to be had?

Eventually, with Trip Advisor and Booking.com suggesting the only place with rooms was the casino, we headed back and took a very pleasant room overlooking a lake. It was slightly confusing taking a shower though as the taps had been plumbed in the wrong way, so there I was, wondering why there was no hot water...

That evening, we didn't go for a flutter in the casino, but walked into Gruissan to the port for dinner. There were lots of places open, so it was hard choosing, and we walked up and down several times before I chose one place where we could eat outside. It turned out to be the restaurant of the hotel that was full, the Hotel du Port. My fresh daube was delicious, its flesh soft and creamy and enhanced by citrus slices. My DB had a tasty salmon tartare which he said was just what he needed after stuffing his face with barbecue flavoured crisps earlier. The staff were very friendly, and we were the last to leave just as it started getting chilly. It was a lovely evening and the port was alive with people enjoying one of the last balmy evenings of the year.

The next morning, we woke up refreshed from the extremely comfortable bed, and walked to the port for coffee and croissants. It was extremely lively with a rowing competition in full flow. Teams (both men and women, and even mixed) in heavy wooden boats rowed 50m or so up to a buoy, then turned around it and rowed back cheered on by enthusiastic onlookers. It was extremely windy and I should think it was exhausting rowing the final straight into the wind. 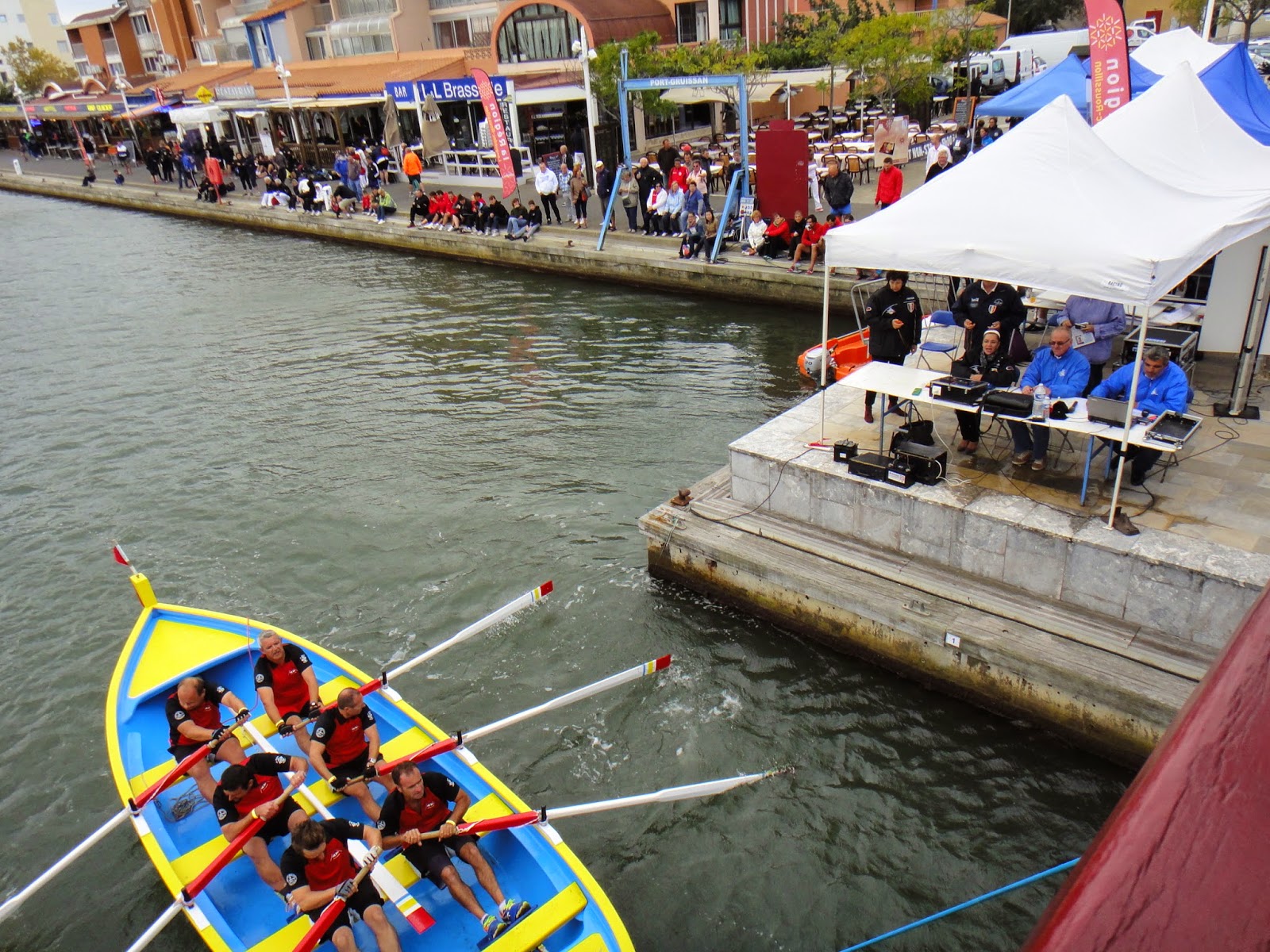 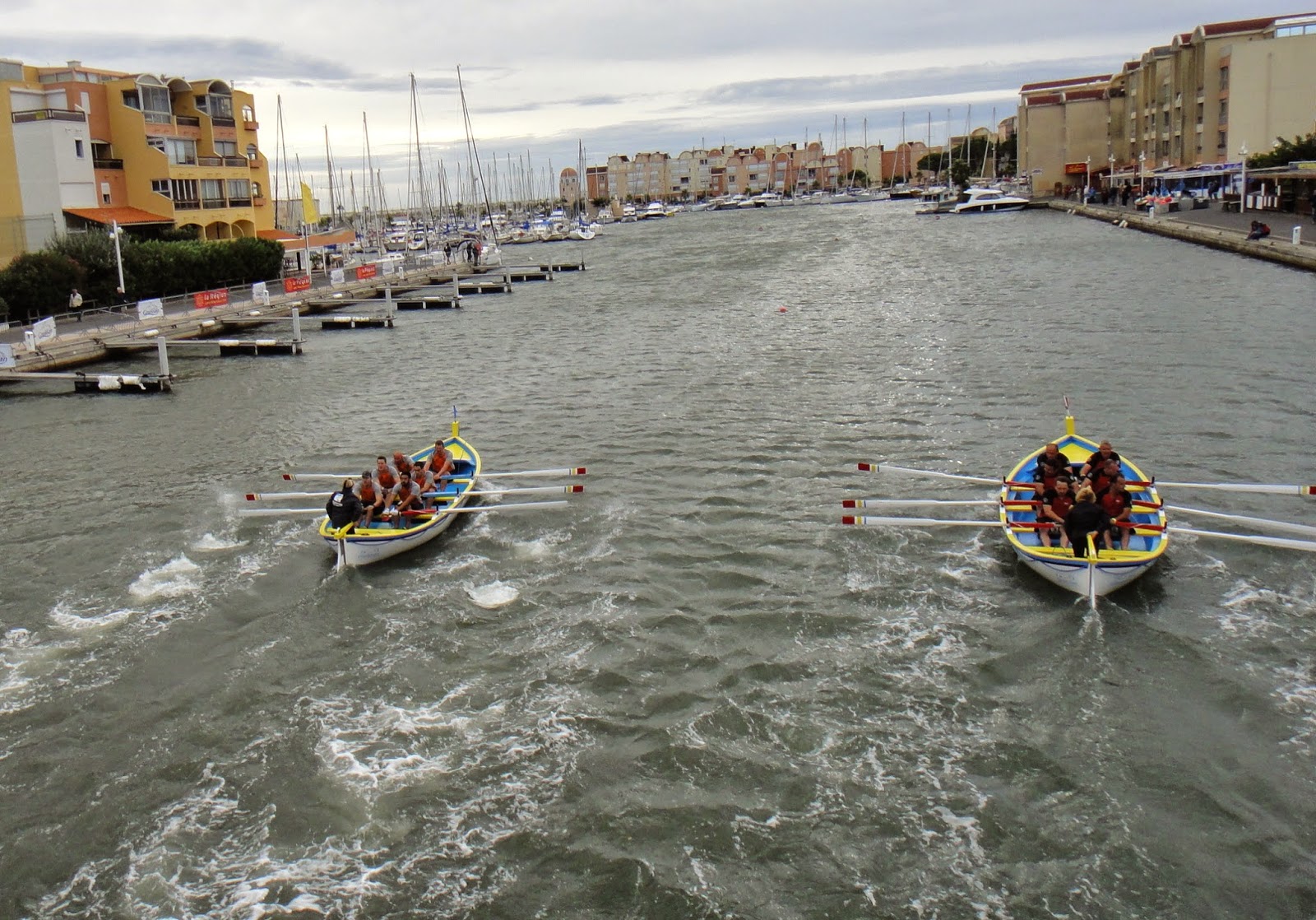 We ate a couple of croissants before my DB decided to look up the number of calories in each one. Did you know a croissant has 406 calories? I thought it would be about 200! We needed the walk around the port after that to burn them off!

Gruissan port is huge and very busy with sail boats in every berth. The architecture of the flats is very 70s although they made a bit of an effort with the rounded tops, but the actual construction is pretty crappy. Still, there are lovely views over the port. We walked round to the dry docks where there were many different types of boats on supports including an old grey landing craft. The rigging clanged and thwacked in the gusty wind. We had to battle against round but I could feel those calories burn right off.

The wind was actually a bit of a problem as my DB didn't want to ride the bike in the strong gusts. He negotiated with the hotel for us to stay until 1.30pm when hopefully it would have died down somewhat.

We left on time in a more subdued breeze and headed back to Montpellier via a north-easterly direction following the sat-nav's idea of scenic routes, and those green roads where possible.

We passed through the villages of Aude and Hérault, some barely bigger than they were fifty years ago, others expanded in sprawling estates of new boxy houses on the outskirts.

We crossed the Canal du Midi, still magnificently lined with plane trees... for the moment.

The previous day we had crossed a bridge where on one side the age old (diseased) trees were still in place, and on the other, they had been cut down and replaced with young trees. One side was shady and atmospheric, an historic waterway listed as a world heritage site, the other was glaringly open to the elements, and... just a canal.

We made it back in good time to find the house relatively clean and tidy and no evidence of anything untoward... like wild parties or extreme cooking.
Published at 10:23 pm