The two months of summer here in Montpellier are the worst. It's too hot, and I'm tired of it. Fortunately, I missed two of the hottest weeks this year by going to England and Wales on holiday. Some people come south to burn on the beaches, I go north in search of heat relief.

I found it too. I don't think it got above 20°C. Meanwhile, it was scorching (caniculaire) here, getting up to 37°C during the day and 28°C at night. Too hot to sleep. Glad I missed it. Glad I got away from the tiger mozzies too. You can't sit outside and enjoy an apero, lunch, or evening meal without being a magnet for the little buggers. They manage to spoil one of the most appealing aspects of living in the south.

My mum lives near London, so I took my youngest and niece up to town. I had asked them what they wanted to do, and sent a list which included teen-friendly ideas:

No prizes for guessing that The London Dungeon was top of the list! It's made for teenagers and they love it. We bought tickets online on their website which meant we could jump the queues. It's now located near the London Eye on the river, having moved from the dingy back road where I expected it to be. We nearly missed our slot because it isn't signposted until you're practically in front of it.

It was a big hit, and I was full of admiration for the young actors and actresses who have to perform their sketches several times a day and stay motivated for each audience. It's definitely value for money, and I'd recommend it to anyone who wants to amuse and educate their teens about the murkier history of London. A group of visitors is taken through the Dungeon, starting by boat, stopping at one vignette after another to watch a character describing an event, or a witness to Jack the Ripper, or a nurse in an old operating theatre, or a journalist investigating Jack the Ripper, or a mad judge in a court room, etc. There's even audience participation, and I was picked to be tried and sentenced by the mad judge. It was great fun.

After a picnic lunch by the Eye, we got on the tube to Liverpool Street Station and walked around the East End doing the London Street Art Walking Tour, chosen by my niece. The area north of Liverpool Street Station is, as my mother puts it, 'achingly trendy' with shops such as Blitz  London which is a huge emporium of vintage stuff and rated in the top ten of Vogue.com's things to do in London. We popped in to have a look as there is a lot of advertising for it, but my two were not interested in the 'old clothes'. I regretted throwing out some of my old stuff, and am thinking of hanging on to those two bin bags of clothes that are still on my landing awaiting their fate.


There's a lot of graffiti in France, but it's 99.9% rubbish - mostly tags which are the visual equivalent, and as crude, of a tom cat marking his territory. I've never seen what you might call street art here but I'll be generous and assume that somewhere there's a 0.1% example. I'm not including the amazing trompe l'oeil that decorate some of the boring walls of buildings.

The walk takes you along Brick Street, Petticoat Lane, Hanbury Street and past Old Spitalfields Market which is now just a covered market but was where we bought the flowers for my wedding back in 1995 when it was London's flower market.

Check out this selection of some of the amazing works of art we saw: 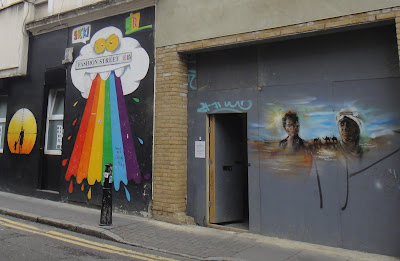 Some artists take a feature of the wall and use it as part of the picture. Some make a political statement.
On the above street, we came across a guide who was taking a group around the street art streets so I listened to him talking about the cavalier. He used the picture to talk about the hurried nature of street art because you can see dribbles of paint... People had paid good money to hear that. 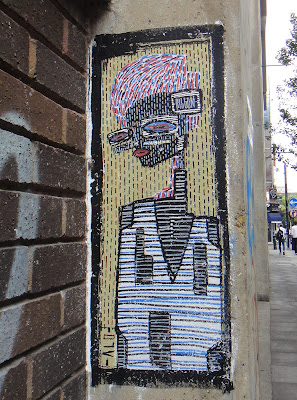 We were not the only ones mooching around with a camera. There were others who were either on the same itinerary as us, or something similar and wielding expensive-looking material. 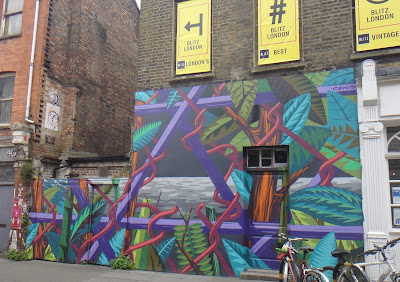 I can't imagine these being rustled up overnight. 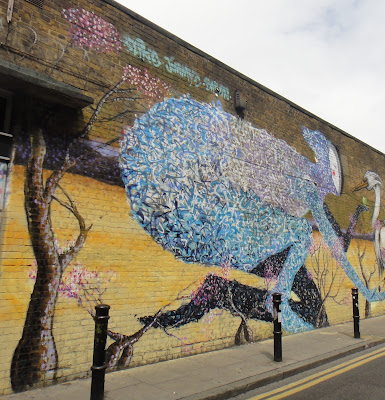 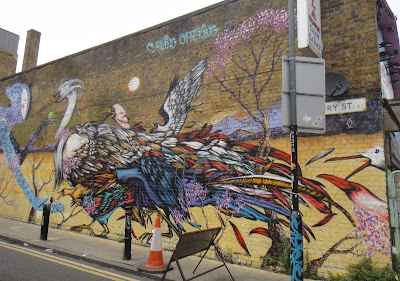 On the walk you can see a rich variety of styles concentrated into a relatively small area. But you do need comfy walking shoes. 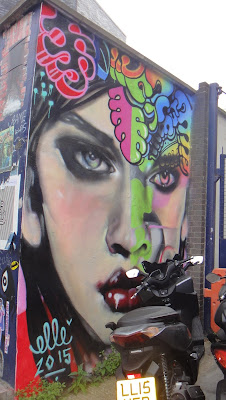 Petticoat Lane Market was not at its most vibrant. The best day to go is on Sunday, but we were there on a Tuesday and walked past stalls of cheap tatty clothes, which were probably made in sweat factories in the buildings behind. The windows of many were suspiciously shrouded. 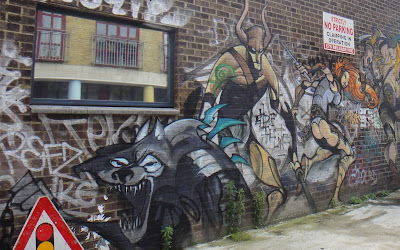 There are some beautiful old brick factory buildings some of which have been refurbished into offices, including one which houses part of a university. If you like industrial architecture, there is a lot to admire.

We didn't quite finish the walk but, after deciding enough was enough, returned to Liverpool Street Station to relieve our feet and have something to drink at Café Nero before going our separate ways. It was a cool day much appreciated by the 14 and 18 year olds.
Published at 9:51 pm