The boat trip up the River Tawe was very interesting but to get more intimate with a ruin, you have to go to the Aberdulais Tin Works and Waterfall. It's a National Trust site located in the Vale of Neath. My mother went there years ago when all that was apparent was the waterfall.

But there has been a lot of restoration and conservation work since, and it has revealed the ruins of the most recent industry to occupy the gorge - the tin-plating works. The site has housed a succession of mills since 1584 : copper smelting, iron-working, textiles and grain mills and, in the nineteenth century, tinplate.

In its heyday, tinplate from the works was exported all over the world, and only stopped when the Americans slapped huge tariffs on tinplate imports to protect its own infant industry. Some of the Welsh workers went to the US to use their skills in the factories there. 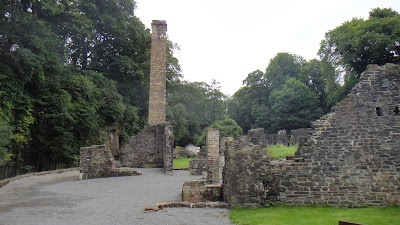 The museum really tries to convey the conditions of the workers. There are videos, a small cinema, displays and objects dug up from the site. Local children tell the stories of their forbears on film, how they were put to work at the age of eight, and the terrible conditions they endured. It was so hot, for example, that sweat ran out of their shoes.

The wheel, that uses 400 year old technology, was built by students and apprentices of British Steel at Port Talbot. It's the largest electricity-generating wheel in Europe. It wasn't working when we were there, but it normally produces 100-120kw of electricity per day.

The turbine has a generating capacity of 200kw and provides electricity to most of the neighbourhood!


Apparently the river is quite something when it's in spate. It was already quite dramatic during our visit after raining overnight.
It was an exceptionally interesting visit; well done the National Trust for all the work they've done to make the museum as fascinating as possible.

They even provide picnic tables for those who bring their own food, which we did, and the rain held off while we ate it!
Published at 6:54 pm