Looking back on my first year as a Motarde

It's the end of my first year as a bike rider, or 'motarde' as they so beautifully put it in French. What a year of adventure, new friends, new experiences, and a wonderful feeling of freedom. I take my bike everywhere - everyday to work, and for weekend fun - a total distance of 16,000 km.

After my training forays to Millau and Gordes (already written about before), and my big trip to Loupiac for the Horizons Unlimited Adventure Biker weekend, I started taking part in demonstrations organised by the FFMC34 which coincided with the now infamous Gilets Jaunes demos.

At Christmas, there was a more lighthearted parade in aid of charity when we all dressed up in Santa costumes.


Having enjoyed the camaraderie of the group and the friendly welcome I received even with my little 125 cc I decided to join the FFMC34 in January and have participated in the monthly meetings ever since. The demonstrations gave way to roadside Relais Calmos in the nicer weather to encourage bikers to stop and have a rest, cup of coffee, and chat about bikes, equipment and maintenance.

We also attended the Cevenn'Oil gathering of old bikes where we provide fun and laughs for the kids with mini motos. I of course had to have a go...

Recently we spent a weekend on a motorbike-only campsite near Lunas in Haut Languedoc, with lots of winding roads and beautiful views to get there.

In May we went to a giant picnic at Lake Salagou organised by le Gang des Motards where there were over 900 bikes and 1200 bikers.

On Ascension Day, a day off, we got together for a barbecue at HQ before the monthly meeting. The Hérault FFMC is very active and they're a great bunch of bikers both motards and motardes.

In February, I learned about the Women Riders World Relay which is taking place this year. A baton is being passed around the world by women bikers - different ones along the way - and riding to a strict schedule so in rain, wind, even snow, whatever the conditions! It's an amazing adventure and one I wanted to be part of, but with only a 125 cc, I couldn't join the official relay. So I volunteered to organise the France-wide off-shoot, the Ripple. We have a flag rather than a baton and it is going around France so that all the women who wanted to join in the relay but couldn't can participate in the Ripple.
Through the WRWR, I met a group of amazing women bikers who were the riders for the official relay. I was there when the baton passed through Montpellier, and with my Ripple hat on, I was part of the group that stayed overnight nearby. They were such a friendly, fun bunch, we all stayed in touch and have been riding and getting together ever since.

Thanks to the WRWR, I learned about WIMA the Women's International Motorcycling Association and WIMA France. WIMA France helped me with the start of the Ripple during the Touratech Travel Event held in Orange.


I was camping in Chateauneuf du Pape over the weekend of the event with my WRWR buddies and had a fantastic time with them and the WIMA motardes. The campsite laid on superior aperos each evening with local (Chateauneuf du Pape) wine producers which gave us a superior state of merriment...

Although it rained on my way there and on the way back, the rain kindly held off on the Saturday when it was all happening!

This year I also participated in my first ever Poker Rally which was organised by MCT2000 who are based in Clermont l'Hérault. Another merry group of bikers, they organise biker rides in the region and beyond. The poker rally involved solving clues to the names of local places which provided the itinerary for the circuit. I was hopeless, but got teamed up with another woman who was a bit more with it, but we needed the kind and generous help of others if we were to get off the starting blocks. At lunch time we all stopped for a merry picnic together, and someone sat on a ripe banana which of course set us all off (again).

For International Women's Rights Day, I joined about 500 other women including WRWR and MCT2000 buddies in Nimes for Toutes en Moto. 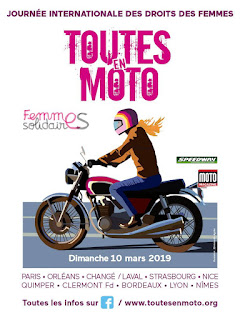 There was a lot of pink about...

I'm currently taking lessons to sit the motorbike licence test. I've had such fun on the little Honda, but I'd like to be able to keep up better with my buddies who have bigger bikes, go further and have even more adventures. It's been an amazing year. The biggest thanks go to my former DB who bought me the bike and encouraged me to become a rider rather than remain a passenger. It's changed my life. So have all the people I've met, and especially the great friends I've made and had such fun with.