It's been 11 days so far in this the second season of pandemic catastrophe Covid-19 lockdown. Back to teleworking, new and improved this time with a printer and set of shelves to tidy up my files, and it's back to limited outings for walkies and essential shopping. 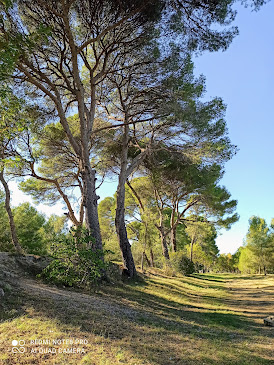 Local to me now

The bookshelves in Carrefour have all been screened off but you can buy books on Carrefour Drive and collect them 20 minutes later. Where there's a will... and all that. If bookshops have any sense, they'll set up a 'Drive' system too. Install a table outside, get customers to tell you what they want, shoot off and get it. Necessity is the mother of invention.

Another variation with season 2 lockdown is that you can't buy alcohol after 6pm even in the supermarket. There was much horrified shock on Facebook and the word spread so that we all knew about the dangers of shopping after 6pm. Forewarned... 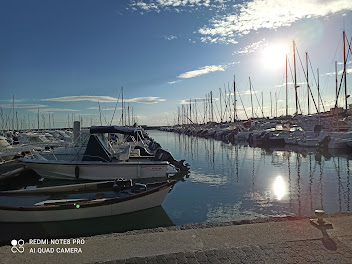 Meanwhile I finally got round to some tasks I'd been putting off, but was so in need of variety, I was spurred to action. The hedge in the front garden has been drastically pruned back to allow visibility of the front door and hinder the nefarious activities of potential burglars. And Sunday afternoon was spent shortening two pairs of jeans using the visible hem method. If you don't know it, it's really cool and you don't need a sewing machine (although it would cut down on the time it takes!) although you do need to sew. There are lots of videos showing you how to do it, here's one:

While I sewed away, I listened to a documentary on Melania Trump on ArteTV. Do you remember when she read out a speech that plagiarised Michelle Obama's speech? I was shocked to learn that the White House aids did it on purpose because they thought Melania was getting too much attention. The lesson there is never to read a speech someone else has written for you without checking it first! I'll remember that if I ever find myself in a similar situation.

This is the week when we remember those who were sacrificed in the Great War. I watched a live service from Great St Mary's Church, Cambridge on Sunday as I can't access the BBC live. I've also been reading Ben Elton's 'The First Casualty' set in World War I. A disgraced police detective sent to prison for being a 'conchie' (conscientious objector) ends up investigating the murder of a viscount in France. It was a bit slow to start, but there is some magnificent writing on the war in the frontline, life in the trenches, and the abundance of poets (Elton seems to have a thing about war poets). There's some great humour too.

It's a book that's received some scathing reviews, including one by The Independent's Jane Jakeman who describes it as

a Barbara Cartland story re-written by a dirty-minded schoolboy during a monotonous history lesson.

A bit harsh, it's not at all like that although it was vaguely reminiscent of Blackadder Goes Forth in places. I enjoyed it, she didn't.

To end on a positive note, here's a photo of my purr-sonal assistant being a real help while teleworking at my makeshift desk of cardboard boxes and bookshelf shelves. Fun times. 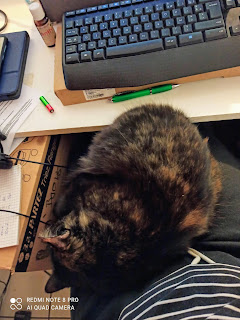