My poor TWDB. By the time we had made our way around Ikea and paid, I was in a foul temper. Nothing to do with him though... kinda. 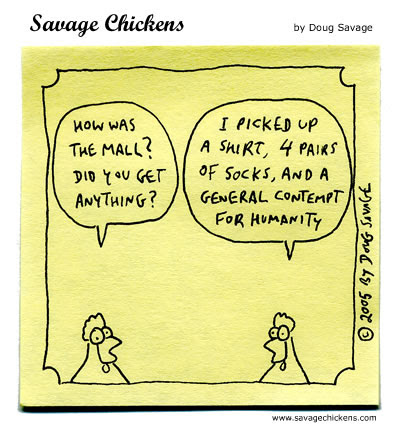 Effing Ikea it was, again. The last time I was in that wretched place I was looking at sofas and was so disgusted at the crap on offer that I think I vowed never to set foot in the place again. So much for promises. Still, I'm not sure I actually said it out loud to anyone, so with no witnesses, I can quietly overlook my treachery. You know what they say - The only person you can't fool is yourself - but who's trying?! I just convinced myself it was for the greater good (mine) and that was enough.
We went ostensibly for two things. One to look at kitchen hoods; and two to get a new duvet (gnashing of teeth). I then made a quick list of 53 other useful items I might as well get while I was there, as you do - kill as many fricken' birds with one stone. NG then called to give me a further 24, and her lodger another 1 (which happened to be a fully-fitted kitchen including appliances).

We got there 40 minutes before closing. Ooer, it was gonna be a rush job, and definitely no time for meat balls and rotting cabbage. First things first - the hood. That took all of 45 seconds. At that point we could have gone home, or out to dinner, or over to the caff for meatballs, but I really did need a duvet (you could always skin the cat and use that, suggested my suddenly not-so-TWDB).

So we made our way around the entire shop twice (well, once) and found the duvet section. By this time, some helpful member of staff was reminding us over the tannoy that Ikea would be closing in 30 minutes so we should be making our way to the exits, which instilled a panic-stricken grip within my heaving blood vessels (or arteries, take your pick) and, blinded, I could barely make out the mile-high signs indicating the degree of hotness of the duvets.

My restored-TWDB came to my rescue and reminded me we had acres of time to make a reasoned, informed, price-conscious decision within the allotted period. Too right it was going to be price-conscious. The most expensive duvets were well over 100 euro-nickers.

Naturally, I prefer feather duvets. They make a lovely scrunchy noise and spike you from time to time with escaping quills which remind you of the glorious natural product you sleep beneath all snugly and plumped up. Unfortunately, my TWDB advised me that he was a tad allergic and that a synthetic duvet would be more comfortable all round.

Good, only another 86 items on the list to go, and still 12 and a half minutes before closing. My next challenge was mugs. I must tell you, Ikea has the crappiest choice mugs outside, um, some cheapskate $1 dive (had to think about that one). They are too small and way too boring. Pour your morning tea into one without thinking, and you'd scald yourself assuming it was bigger than it was, and then you'd keel over with the sheer tedium of its colour and design.

I was ready, by this time, to throw in the towel and storm out of the shop empty-handed, but I really did need that duvet, so gritted my teeth and carried on. Saved by the end of the list, we made our way to the check-out where I was charged an exhorbitant sum for a collection of 'never knew I needed it 'til I walked past it in Ikea' items and stalked back to the car.

Really, I don't like going to Ikea. I hate the way they lure you to buy buy buy all sorts of must-have but don't-know-where-to-put-it goodies, with enticing prices that, when added up cause your credit-crunched card to wilt visibly and suggest you cut it in two.

My temper was only alleviated once sat in a rather nice restaurant, with kir in one hand, menu in t'other, TWDB opposite making silly comments about alcoholic dependence for stress relief. I really don't see what's wrong with that? I mean, it works!
Published at 4:35 pm