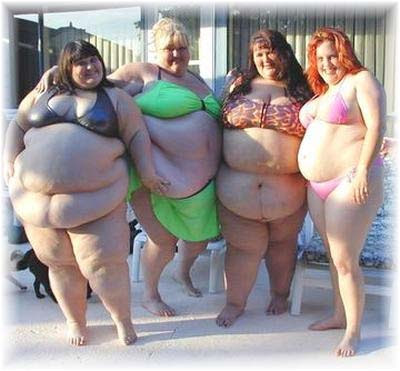 Apparently there is a lucrative market out there for human fat. It's worth $15,000 per litre to the cosmetics' industry. These ladies must be worth 500K at least, and they are by no means exceptional in their fatness. The world's population is exploding with the morbidly obese, many of whom complain that they are discriminated against when looking for a job.

Well, fear no more, mega-fatties of the world. There is hope. A lurid tale from South America has drawn attention to the market in human fat. The Times today has an article about a Peruvian gang who lured victims into the jungle, killed them, removed their limbs then heated them upside down to harvest the fat in large vats. They've been at it for 30years!

Frankly though, why go to all that trouble? Cosmetics companies could simply have a deal with the nearest liposuction clinic where at least they'd be sure that the fat was being removed in sterile conditions.

Just think of the job opportunities for the obese of this world. They could do what they love best - eat for money. The more they eat, the more they earn. Sounds too good to be true though. I have a nasty feeling that if word got around, the market would be (polyun) saturated in a short time and prices would be forced to drop to unsustainable levels of burger consumption.

If this is all making you feel a little queasy, and it does give a new twist to the concept of a 'fat farm', you might think it's high time you turned to making your own cosmetics. Not with a syringe and your own chunky thighs mind, but with natural ingredients such as olive oil, coconut oil and rosemary essential oil.

It's becoming quite the rage, including in France, and there are lots of websites dedicated to teaching you how to make skin creams, shampoo, tonics and face masks. Having looked at them, it's all quite a faff so for the dedicated rather than half-hearted eco-warrior, I'd say. If you're interested, Google 'making cosmetics' and you'll come up with a good selection.