Well we had a lovely time last night at La Reserve Rimbaud. Nothing went awry, it was all impeccable, charming and professional. We were able to sit outside in the balmy Indian Summer evening air overlooking a bend in the river Lez. The water was so still it looked almost stagnant. It was only when you squinted up one eye and fixed a leaf and length of railing that you could detect movement. It's the two dams, the cause of the hold-up we were told.

We were given delectable amuse bouches including a tiny bowl of fantastic olive oil into which we dunked some focaccia. My starter was homard bleu. Not being a lobster connoisseur I asked if it was blue because it was practically raw or for some other reason. It's the name, apparently. They come from Brittany. Anyway, the essentially claw meat was delicate and delicious, served with what seemed to be slivers of turnip that had been given rings of beetroot juice (although the menu says vinaigrette à la beetroot), plus carrottes anciens and caramelised onions des Cevennes.

My main course was hunks of the tenderest fillet of veal ever. They must travel far to find such a supplier because I've never tasted veal that good around here, even when buying it from the butcher at vast expense. It was served with fried girolles and potimarron confits and was une merveille!

I didn't have a dessert because I'm not really very desserty and there was nothing that grabbed my fancy. We had dinner with a bottle of white wine as I'm having my teeth whitened and cannot drink red or rosé. Only white and champagne!

The service was excellent - not too slow, not too fast; it was attentive without being overbearing. Really, it's a very nice place to go for a celebratory dinner (or lunch).

On a slightly different tack, my stats have been going mad recently, with huge inexplicable peaks. If anyone has an idea why this is happening, I'd be interested to know. If it had only happened once I'd think it was a Blogger Blip, but it happens regularly. Ideas on a postcard please. 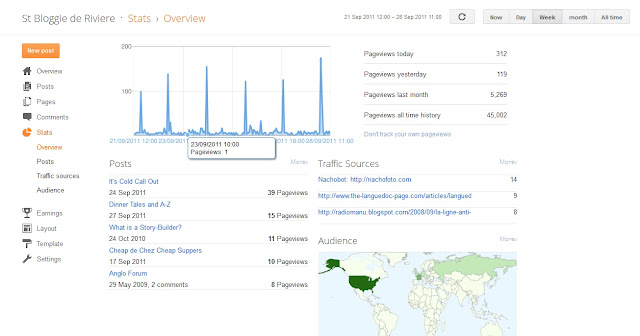