Not So Great Groupon 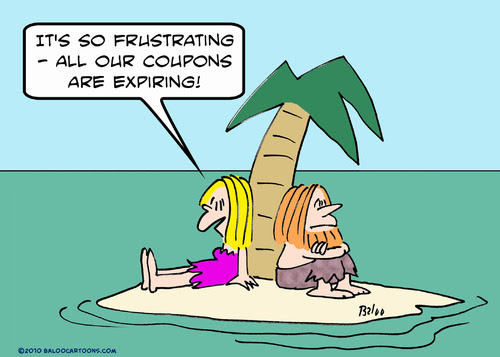 I'm rapidly going off Groupon. The concept is attractive, but the reality is that you have to be a right-on, organised type of person to benefit from all the deals you buy in advance, and that, dear readers, is where I come to grief. That, and the intervention of Sod's Law.

I used to think I was fairly well organised - you have to be to stay afloat in this day and age, what with remembering to keep up with payments of taxes and invoices or be thrown into financial hell, managing children, job, house and the rest single-handed (even when I was married). Managing the important stuff takes ever more energy what with growing boys who have growing requirements and demands, and frankly one just gets tired of the whole damn show sometimes and thinks longingly of escaping to a desert island.

Anyway, I've had some deals that worked with Groupon: I made a calendar of photos for my mother last year (best deal), had my hair cut (unsatisfactorily - they did highlights but no colour and I came out looking half-finished) for half the usual cost, ate at a below average restaurant, and... um, that's it.

The ones that didn't work out include forgetting to go to another (probably below average) restaurant - the deal finished on Sept 15, I noticed this on Sept 23. I gave a microlight adventure coupon to my TWDB who then didn't have time to take it up during the one or two moments when the weather was good at the weekend - we've had a crap summer, and the company was overwhelmed too, so often busy. I tried to get an extension on the time period, the guy said yes, and I had to text him a message, but didn't realise my phone was having a caca nerveux at the time and wasn't sending any messages. By the time I realised this hiccup, the extension period was over.

The latest disaster was buying 4 coupons for the cinema for my son on his birthday last Wednesday. They missed the showing because they were at Laser Game beforehand and it over-ran, and the effing cinema wouldn't let them see the next showing even though they weren't full. I won't be doing that again! And the period you can use the coupons in is really short, so you have to be a regular cinema-goer to be sure to make use of them.

That's €88 I wasted which is about what I saved on the successful ones, so I made no savings at all. I also noticed that when they have an offer on some electrical item like a television I saw, there is no discernible advantage to getting it on Groupon because a quick search on Google threw up the same television for a similar price elsewhere. It was an end of the line model, so was being discounted all over the internet.

Annoyingly, it seems that in the US  if you don't use the coupon, your account is re-credited, not so in France. The system here is 'use it or lose it' (and as I seem to lose it more often than not = bad idea!).

I've noticed other dissatisfied customers in forums moaning about how dodgy some of the deals are, and several have stopped their membership because the offers were either for crappy restaurants, body modelling/hairdressing they weren't ever interested in, or dodgy electrical items no cheaper than elsewhere.

In my opinion, for what it's worth (and if they want to keep my custom), Groupon should work harder at getting a better quality of company interested in offering deals, although I suppose these ones don't need the hassle because they are successful already. Anyway, buyer beware, Groupon is not the panacea of bargains it makes itself out to be, or not ones anyone with any standards of quality would be interested in.

If you have any fab Groupon success stories, I'd love to hear them! I have just the one - my mother loved the calendar (that it took me hours to make).
Published at 8:06 am