Before last weekend I hadn't done much motorbiking recently. No surprise there what with a month of rain in December (or if it wasn't it felt like it) and Arctic temperatures in February. Happily though, just in time for the half term holiday, the weather perked up and our thoughts turned to adventure, the wilderness - well, the Languedoc-Roussillon wilderness for what it's worth and it can get pretty wild - and discovery.

The boys were up at their dad's so I took a day off and we decided to go west. We took the scenic coastal route as far as Cap d'Agde. The sky was a cloudless blue, the sea was a seductive azure but not enough to entice us in for a swim. From Cap d'Agde, we headed inland, going round Béziers and continuing up the scenic route to Murviel les Béziers. The temperature was about 15°C so a wee bit chilly but certainly bearable with a layer or three.

We stopped for a picnic lunch by the River Orb just outside Cessenon sur Orb, me with my fresh baguette sarnie filled with jambon sec, lettuce and tomato, a packet of crisps and apple, and my TWDB with his protein drink of Gerlinea (beurk). He asked me (hopefully) if I'd made a sarnie for him too, but when we'd discussed the question earlier he'd said I should take a sarnie to eat on the road and he would have Gerlinea. As he's on a diet I took him at his word thinking that making a sarnie might be appreciated on the one hand because it was delicious but regretted on the other because it was hurting the diet. Next time I asked him to tell me if he wants a sarnie and, having said what he means, I'll not have to try and second-guess him. As compensation, he stuffed some of my Brett's Salt & Vinegar crinkly crisps...


After lunch we carried on north through Roquebrun - apparently known as the Nice of Hérault (who knew?) - following the River Orb to Mons on the main road. It's a very pretty river valley with cute villages set on hillsides surrounded by limestone rocks. At Mons la Trivalle we decided to divert to see the Gorges d'Heric. We assumed it would be a lovely drive along windy roads with views of the gorge which is what we normally find when driving along gorges in the region.

What we found on this occasion though, was a car park. In season you have to pay to park, but thankfully out of season it was free or we'd never have got any further. Basically we just wanted a glimpse, a quick look and be on our way. Our intention was not to stop and go for a walk - we were biking not hiking. If we'd looked at the map we would have seen that there is no road, but we just assumed it would be like the others. We made a tour of the car park and saw nothing, and were just about to leave when we noticed a small road that indicated the path to the gorge. It was forbidden to all vehicles but the barrier was open...
Temptation overcame us, being motorbike rebels an' all, so we ignored the sign and set off. You can see from the photo that the road is pretty good so it was not dangerous or anything, just 'interdit'. Being February we passed no one, but noticed an elderly couple up ahead. They heard the bike and turned round to glare at us just as we came to an opening in the road where we could turn round because we couldn't go any further. I snapped this photo before we turned and drove off. It looks a lovely place but probably better to visit it on foot...

From Mons we continued west to Olargues, one of the Most Beautiful Villages in France. Having stopped to go through it many times, we just by-passed it this time and carried on to the Grotte de la Devèze where we turned south onto a scenic route, leaving Hérault to enter Aude. We did this route last year from the other direction when the temperature dropped to -2°C and it started snowing. This year, the Arctic conditions were over but it was still a mere 9°C up there at Lespinassière and felt very chilly as we drove through the shady forest of Soulanes de Nore, snow visible on the side of the road and scattered over the high plains. People here still needed the snow plough to cut a path to their farmhouses and animals. It was less than 1000m high, but we found ourselves in a truly mountainous winter.

Off the mountain it was warmer, but I was pretty cold by now so we made our way to Carcassonne to find a hotel. We stopped outside one that had lots of Guide du Routard plaques, but then saw that they stopped in 2008 - not a good sign. I went in anyway and enquired about a room. They had one at €70 so I asked to see it. When I saw it I understood why they were no longer in the Guide du R. It was small, hadn't been refurbished since god knows when, had a tatty bathroom and tattier furniture, and all for €70. We were not interested so carried on up to the old walled city. Outside the walls we saw this place:
The walled city is just on the other side of the road, so perfect for lazy sods those concerned about drinking/driving who don't want to drive to find dinner. This part of the hotel is the 3star section, with rooms at €160. On the left, out of sight, is another road that you cross to get to the 2star building where we were offered rooms at either €90 (traditional) or €100 (modern). We decided to take the modern room because it was snazzily decorated in a rich yellow, bathroom included: 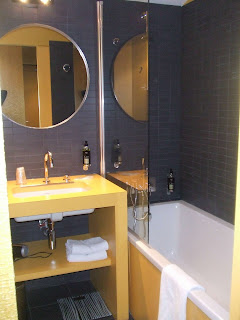 and with a view onto the old city which clinched it:
Perfect! We then went into the city to have a walk around. It's normally heaving with tourists, but out of season it's much more bearable.
That evening we mooched back into the city to eat at a Guide du Routard restaurant, le Tour Davejan. I had a copious dinner of duck off the menu which was very tasty.

The next day we headed off south into Cathar country, passing through Lagrasse and along down towards the Château of Peyrepertuse. We were stunned by views of the Canigou in the distance covered in snow 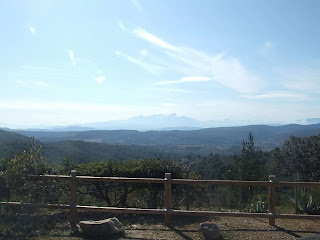 and the odd ruined castle that popped up out of nowhere 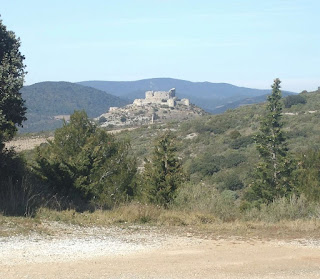 until we found ourselves at Tuchan at lunch time. Here we stopped at the bar on the main road and ordered true biker fare of half a baguette cheese sandwich (with butter) and sat outside in the sun to enjoy it, the bike sitting happily on the other side of the road. 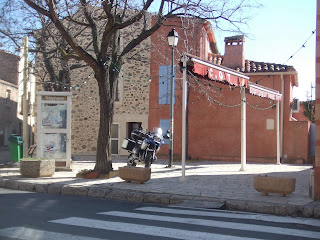 After lunch we headed to the sea and had a break on the practically empty beach at Le Barcarès where the sea was a stunning azure again. I'm not sure why, but a little further up Le Barcarès is a beached cruise ship, the Lydia. It looks like it's been picked up by a hurricane and set down firmly on land. 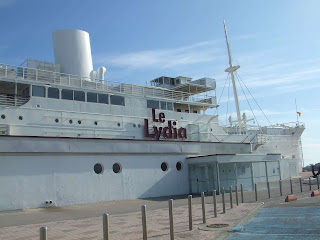 In fact, Wikipedia gives its history here and says that it's now a casino. Next to it was a little arty zone with totem poles and metallic sculptures. I thought it looked all rather desolate, and indeed a bit desperate. 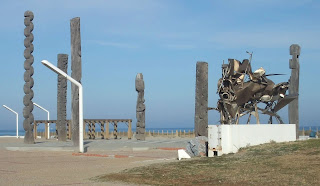 Our day finished with a fruitless search for lodging in Capestang. I wanted to go to the Seville orange fair in La Caumette on Sunday, but we had to find somewhere to stay. The whole place was closed down, and we found ourselves in a lodging-free zone without a helpful guide book or internet. My TWDB decided he didn't like Béziers so we had to go home. Naturally, the next day, having enjoyed a nice restaurant and a couple of bottles the night before to make up for our failure, we didn't have the energy to hike it all the way back to Minerve so missed out on the oranges, and thus no marmalade for us this year. I was a bit miffed, but have since bought the Michelin guide for L-R so we should not find ourselves bereft of ideas from now on. Lessons were learned...
Published at 5:17 pm