I left you admiring the twists and turns of the Gorges de l'Ardeche, by the end of which we were all gorged out and racing towards Pont St Esprit. There are two remarkable things about this town. The first is the huge market and endless events (or it seems like it because there's been something on each time I've been there), and the other is how windy it is. The wind comes howling down the Rhone valley and when you're on this bridge over the Ardeche a few kilometres from where it meets the Rhone, you get a major buffeting.
I stuck my arm out to get the photo above which nearly upset the stability of the bike, so windy was it. My DB yelled at me to keep my arm in!
I don't know why they comb the river banks, but it sure looks like a Zen garden occupation.

Once over the bridge, we had to come back again as there was nowhere on that side that we wanted to be, so I kept my arms closely tucked in as we ventured across again, and headed out towards St Ambroix in search of a hotel.

Once there, it seemed rather a dump, so I got out my phone and had a look on Trip Advisor for somewhere to stay nearby. A phone with 3G has definite advantages! Up popped the Hotel le Clos des Arts at les Mages a couple of kilometres away.

What is remarkable about this hotel is that it was originally the home of the late Marcel Schoenenberger (d. 2004), the sculptor, who was born in Alsace and specialised in mother and child forms. He bought it for his family of six children, three of whom have been restoring it for the last 25 years. Goodness, what a gigantic work it's been too, but they've made a magnificent job of it. The restaurant on the drive up is the latest addition to the hotel.
The demeure also houses a museum dedicated to the works of Marcel and Olivier Schoenenberger with 700m² of sculptures. We didn't actually visit the museum this time as I had to get back to Montpellier, but it certainly looks worth it from the website. As the restaurant was a work in progress, we ordered a couple of pizzas and a bottle of rosé which were delivered in good time, and sat out on the terrace enjoying our dinner in the end of summer evening warmth.
The next day (after a €7.50 breakfast for me), we took mini roads back towards Alès and beyond, only a few metres wide but very pretty (if slightly hazardous). 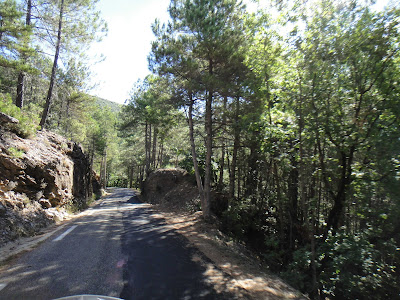 Scattered about were more tiny hamlets that make you wonder how their residents make a living, and how they must be at the height of wintry weather. It can't be fun tackling 10km of tiny icy road every time you run out of sugar!

All these sights were at most less than two hours from where we live. It's all there on our doorstep for the taking. What a region!
Published at 10:46 pm