Blinded by the Light...

Shout if you've heard of Anthony Gormley. Who he? Well, he's a conceptual artist. Oh, beurk, I hear you cry, what, more dead cows in boxes and piles of poo that pass for 'Art'? Er, no. This one is much less sensationalist and shocking, and impresses rather than gratuitously provokes.

I took the boys to the Hayward Gallery on the South Bank to see his exhibition 'Blind Light'. It was a risk because they are not overly fond of exhibitions, especially ones where you touch nothing and just walk sedately about. Boys don't really do sedate walking, do they?

The plan was to see the exhibition and then go on to the Science Museum to visit Spy Trails. Up we toddled on the Jubilee Line, getting out at Waterloo (haven't we been here before...) to walk the short distance to the river. Whilst not exactly summery hot, it wasn't raining, flooding or snowing, so we were happy with cloudy and warmish. The boys wanted to dash into an enticingly wet piece of water sculpture called 'Appearing Rooms' but I persuaded them to wait until afterwards. Water and boys rarely stay separate for long...

In we went to the Hayward, and found our way to the light box. Clouds of vapour were pouring out of this large perspex room, in which vague forms of bodies could be seen every now and then. We went in and were immediately surrounded by the vapour to the point where you could barely see your outstretched hand. Disorientating and damp, it's designed to enable you to lose yourself even though around 25 other people are in there with you. My youngest kept a firm grip on my hand and we edged our way around the side, looking, I suppose much like this from the outside.

It was a fascinating sensation being in there, as though walking through a dense cloud. It was disconcerting, being so blind, and I didn't feel I wanted to spend too much time in there. There is a notice warning those who are claustrophobic or prone to panic attacks not to go inside...

Having been shaken, but not stirred... we went around the rest of the exhibits. There was a room filled with concrete blocks representing the exact measurements of 180 people aged upwards from 18 months. I set the boys on a task to find one that resembled them, as they were displayed in a higgledy piggledy all over the room way rather than placed by size. Apparently you can tell which 'people' are sad and which are happy. I asked a steward to help out on this, but it was his first day and he hadn't done his homework...

Outside on the terrace, Gormley had prepared another surprise called 'Event Horizon' with 30 figures dotted around on building rooftops. The boys and I counted about 20 of the bodies with them keenly scanning the horizon for more. My youngest was also struck by the webs of steel in the form of bodies back inside the Gallery. He later drew a picture of his impression of these suspended shapes encased in intricate rods.

They absolutely adored the exhibition; they could be part of it, participate in it, be challenged by it, and run about. We then went for lunch at Las Iguanas - a treat, after which they dashed over to the water rooms. 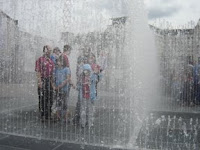 What you are supposed to do is wait for a room to open, jump inside and then make your way around the rooms as the water stops and starts. My two just jumped straight through the water wall thus getting soaked from the offset. They were not alone in getting wet, of course, and my eldest made a friend of a boy who had been in there for some time and was soaked to the skin. By the time he came out, my eldest was in the same state. Meanwhile, my youngest had had enough, and was hanging around by the wall. He turned round and crashed his forehead into the metal shelf that over-hung it so creating a fine wound which bled dramatically. Naturally, I had no tissues or first aid equipment on me, so had to grab his sodden cotton jacket and press it into the wound to stop the bleeding.

That rather put an end to our outing. There was no question of continuing on to the Science Museum - that would have to wait - so we went home and attended to the brave little lad. He spent the next few days with three steristrips stuck to his forehead!

If you get the chance, do get along to the South Bank. It's definitely different!
Published at 11:18 pm